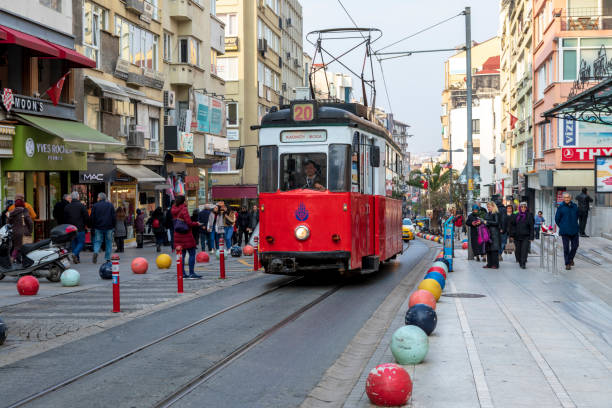 Kadikoy, or as it is translated into English, the village of Judge, located in the Asian part of Istanbul, surrounded by the areas of Uskudar, Ataşehir and Maltepe, and from the south overlooking the Marmara Sea, giving it a charming view, and its proximity to the Bosphorus Bridge and the Maiden’s Tower, making it a distinctive vital area, It is a central place that tourists always come to visit.Kadikoy Istanbul is a famous neighborhood in Istanbul that combines history and modernity with its colorful streets, historical sites and open gardens, all of which made it occupy a distinguished place as one of the most important tourism centers in Istanbul and tourism in Turkey in general, as it is one of the most famous tourist places in Asian Istanbul.Among the most important information about Kadikoy that can be mentioned is that more than half a million people live in Kadikoy, and their lifestyle is predominantly European, in terms of its nature, population and atmosphere.

It is one of the oldest neighborhood in Asian side. Hands changed over and over. The Persians, Romans, Byzantines, Arabs, Crusaders and Turks ruled Kadikoy. The last time, it reached the hands of the Ottomans in 1353 after being badly damaged during the Fourth Crusade. During the Ottoman period, Kadikoy was a popular market for agricultural goods and was also a summer resort for the class of rulers of the Ottoman Empire. In time, it developed into a residential and inhabited by Armenians, Greeks, Jews and Turks.Kadikoy is a modest alternative area. It doesn’t offer much nightlife like Beyoglu. Stores start closing hard after midnight. Visitors leave and residents go home. Very few people go drinking in the narrow streets or along Moda Beach. Kadikoy also does not offer as much shopping as Nişantaşı or historical buildings like the Old Peninsula. However, you never noticed this feature because

Advantages of living in Kadikoy district of Istanbul

The most beautiful areas in the Kadikoy district of Istanbul

Kadikoy Bazaar is a popular traditional market, and one of Istanbul’s many diverse markets. It covers an area of 12 thousand square meters. It displays its products in a wonderful organization, and provides you with a wide range of high-quality products, and a variety of choices of clothes, flowers, accessories, cosmetics and materials.Kadikoy Umbrella Street is one of the most beautiful streets in Istanbul. The reason for its name is that the shop owners decided to hang a large number of colored umbrellas on the ceilings, in order to reduce the heat of the sun from visitors, and give the street a distinctive character.

Kadikoy Umbrella Street is one of the most beautiful streets in Istanbul. The reason for its name is that shop owners decided to hang a large number of colored umbrellas on the ceilings, in order to reduce the sun’s heat from visitors, and give the street a distinctive character.

Baghdad Street extends from Kadikoy to Maltepe, parallel to the Marmara Sea, and includes a range of cafes, restaurants and various shops, and offers many services to tourists, as it is one of the most famous streets of Istanbul, and the shopping center in Kadikoy.

The coast of Kadikoy Istanbul is one of the best tourist places in Istanbul, characterized by its clean beaches, clean water, and it is one of the beaches with integrated services, which tourists need when they come to it..

With the development of the infrastructure in Kadikoy, and the increase in the number of mega projects and development in its infrastructure, real estate ownership has become very safe in this region, and investment in Kadikoy has witnessed an unprecedented demand in recent times.View our offers for owning apartments for investment in Istanbul, and find out the prices.

As is the case in Kadikoy, its real estate and buildings are mixed between old and modern, where the prices of real estate and apartments for sale have gradually increased in the recent period compared to Istanbul real estate, and investment opportunities have increased, especially with the improvement of infrastructure. To learn more about Kadikoy real estate, you can contact us.